Do you remember The Tuna Turner, the ill-designed invention from the '80s?
Occam's Razor is a line of reasoning that says the simplest answer is often correct. Watching Tina Turner turn tuna with the The Tuna Turner on David Letterman's show brings to mind Yogi Berra sage advice, "When you come to a fork in the road....take it."
The Tuna Turner vs. The Fork
While The Tuna Turner appeared to be a clever kitchen gadget, purchased by who knows how many gullible consumers, it was a disaster in every way. Not only was it awkward and difficult to crank, but it was an absolute fiasco to clean. On the other hand, the simple fork-mixing bowl combo, readily available in most kitchens, is easy to use and clean, and by far out scores it's competition. It's laughable to think that I was snookered by the promo into buying one. I'd like to think that I've come along way as a consumer over the past 25 years!

Posted by Lee Enry Erickson at 9:13 AM No comments: 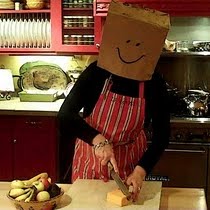